The Use of Flashbacks In "L.A. Requiem" 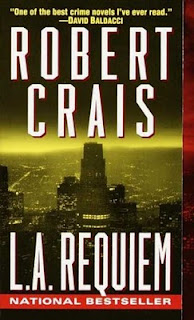 I’ve got a lot of books on my “to read” shelf that I’m really looking forward to – Harlan Coben’s “Caught,” John Irving’s “Last Night in Twisted River,” Richard Russo’s “That Old Cape Magic,” and Stieg Larsson’s “The Girl Who Played With Fire” among them – but right now, my head is not in a place where it’s ready to take on anything new. And so I’ve been going back to some old favorites. In some cases, I just read snippets – treasured memories to help clear the mind. But in the case of “L.A. Requiem,” I decided to give reading the whole book again a shot. And I’m glad I did.

I will never forget the circumstances of how I came across Robert Crais, and in particular “L.A. Requiem.” As I’ve mentioned in previous posts, my late Aunt Lenore was a voracious reader, and one of her favorite genres was detective fiction (another genre she loved was something my wife and I refer to as “bodice rippers”). Over time, she came to have a pretty good handle on what she thought I would enjoy, and since she had very little room in her house in which to store books, she’d literally give me boxes of books to look at, and give a shot. Among others, she introduced me to John Sandford, and I remember reading the first six “Prey” novels over the course of one three-day Labor Day weekend.

About ten years ago, “L.A. Requiem” was near the top of one of the boxes, and there was just something about the cover that made me think it would be really good (that kind of thinking has gotten me into trouble at the record store, but it usually works with books). I’d never heard of Robert Crais, so I didn’t know that he’d been a television writer for two of my favorite shows, “Hill Street Blues” and “Miami Vice.” I didn’t know that he’d already won a lot of awards, and that “L.A. Requiem” was in fact the 8th novel featuring his main characters, Elvis Cole and Joe Pike.

Since then, of course, I’ve gone back and read all of the Cole/Pike novels, and they are all great. But none of the novels that came before, or those that have come since (good as they are) comes close to “L.A. Requiem.” But that’s OK, because there’s little doubt in my mind that “L.A. Requiem” is one of the handful of true masterpieces in the genre, standing aside such stalwarts as Dashiell Hammett’s “Red Harvest,” Raymond Chandler’s “The Big Sleep,” Ross McDonald’s “The Chill,” James Crumley’s “The Last Good Kiss,” and James Ellroy’s “L.A. Confidential.” It really is that good.

In all of the previous Cole/Pike books, Joe Pike had been a supporting character. An essential character, but rarely in the spotlight, which always shone on wise-cracking Elvis (imagine George Clooney at his snarky best, and you kind of get the idea). We learn very little about Pike, except that he is deathly quiet, and lethal. We know that there is a bond between Cole and Pike that goes beyond mere friendship – but we’re never quite sure what it is.

What Crais does in “L.A. Requiem” is really quite remarkable. In effect, he turns the series on its head. And while Elvis Cole still drives most of the narrative, this one is really Joe Pike’s book. Through a series of beautifully structured flashbacks, we learn the life history of Joe Pike, and what we learn explains much. In essence, we learn that Joe Pike had to become lethal and quiet, because that is the only way that he could survive.

The book has a narrative force and momentum that has rarely been matched. Even without the flashbacks, it would be a great book, detailing Elvis and Joe’s search for the killer of Karen Garcia, a key figure in Joe’s past. But it is the flashbacks – usually no more than 4-5 pages long – that lift the book from “great” to “masterpiece.”

My favorite flashback is probably the first one – which tells the story of the day that Joe Pike met Karen Garcia. It sounds silly, but just thinking about it gives me goosebumps. An excerpt:

“Karen’s pulse hammered all the harder as she fought the urge to do something she had never done before. In a moment the two officers would drive away and she would never see him again. The next thing she knew, she was walking hard toward their car, taking long crazy steps as if some secret creature had taken possession of her. The two officers within were watching her approach. Pike’s window came down and he looked out at her. “Yes, ma’am?”

Karen Garcia leaned forward with her hands on the window. “I have a request.”

He stared at her, and her mouth went dry. She absolutely knew that she was making a fool of herself. “Would you take off your glasses, please? I’d like to see your eyes.” The older officer made a face like he wanted to spit; irritated, as if she had interrupted something. “Oh, for Christ’s sake.”

Officer Pike took off his dark glasses, and looked at her. She felt her breath catch. His eyes were the most liquid blue, the blue of the sky over the high deserts of Sonora, the blue of the ocean where it has no bottom and is infinitely clean. But it wasn’t the blue that stopped her breath. For just a moment when the glasses were first pulled away, she could have sworn that those eyes were filled with the most terrible and long-endured pain. Then the pain was gone and there was only the blue.

Karen Garcia said, “Would you like to go to a movie with me this Friday night?”

Pike stared at her for so many heartbeats that she wondered if she’d really spoken the words aloud. But then, slowly, he fitted the dark glasses over the incredible eyes again and put out his hand for her to take. “My name is Joe. May I have your phone number?”

When he touched her, she quivered.

“L.A. Requiem” – a masterpiece that should be read by everyone.
Posted by Jeff Vaca at 9:57 AM

I couldn't agree with you more, Jeff. Author Crais literally blew the doors off of the series, and the genre, with this masterpiece. I introduced this series to co-worker/friend some months ago and she has been reading them in order. This week she crossed what I've termed as the LAR threshold and has been thanking me ever since for bringing her into the Cole/Pike universe. She's now officially a Craisie. I cannot recommend L.A. REQUIEM (and Robert Crais) enough to friends and readers. You've delivered a wonderful post and great examination of my favorite novel, my friend. Thanks for this.

p.s., come September, I've promised myself to do again the loose trilogy of L.A. REQUIEM, THE LAST DETECTIVE, and THE FORGOTTEN MAN. You got me even more jazzed about it.

You got me really revved about this book all over again. I may have to tag along with le0pard13 and re-read the trilogy soon.

Great post. LAR is one of my all-time favorites. The hardcover stays on the shelf, but I re-read my first paperback 3 times before passing it on to a family member... I purchased a replacement. :-)

The book discussion this post inspired occurred last Saturday, Jeff. Elyse summed it up in post today, with a shout-out to you. Hope you enjoy. Thanks.

Great post, Jeff! My husband introduced me to Crais' world of Cole and Pike. Once I finished LAR, I looked at him and said in an astonished voice, "How did this not win the Edgar that year?!" He was in complete agreement. This is one of my top 5 books EVER!

Btw, it's fun to know that I'm not the only one who will occasionally go back and read favorite parts of books when I'm just not up for delving into a completely new book. Of course, after our LAR discussion this weekend, I believe I'm going to have to preempt a book from my reading queue to read THE LAST DETECTIVE and THE FORGOTTEN MAN. ;)