Notwithstanding the bitter disappointment of the Arizona loss keeping the Bears out of the Rose Bowl, it was another wonderful year for Jeff Tedford's California Golden Bears. 10-3, a record that would have been unthinkable five short years ago, now seems vaguely disappointing to many, including the nattering nabobs on ESPN (although to their credit, Chris Fowler and Kirk Herbstreit did a great job last night emphasizing the significance of Cal's accomplishments under Tedford) who seem to view anything other than a conference championship and a BCS bid as failure. Hey, I got news for you jerks! We suffered through EIGHT STRAIGHT LOSING SEASONS and looked bad doing it before Tedford got there! These have been glorious years, and a Rose Bowl bid would just be icing on the cake.

Even though the touchdown at the end was unnecessary (and that was a great shot of Tedford grabbing quarterback Steve Levy by the face mask to make sure the point got across), the 45-10 blowout win over a good Texas A&M team was an important one - the Bears had faded in November, and hadn't looked consistently strong on both sides of the ball since mid-October. This is something that's now happened two seasons in a row, and whether it's lack of depth or bad conditioning (which I doubt), I suspect it will be something that Tedford works on next year.

One Step Up, Two Steps Back

So much for David Stern's holiday season. No doubt buoyed by the selection of Dwayne Wade as Sports Illustrated's Sportsman of the Year and the media blitz surrounding the triumvirate of young superstars (Wade, LeBron James, and Carmello Anthony) expected to lead the league back into the promised land, he gets burned by the silly "composite ball scandal" and now by the precedent-setting, 10-players tossed brawl in New York City last night. Making a bad situation worse, the brawl featured none other than anointed superstar Mr. Anthony, who by all accounts came perilously close to pulling a Ron Artest and getting himself thrown out for an entire season.

No doubt, the league will overcome this latest embarrassment, but it's just one more example of a pampered superstar exhibiting behavior that, in the long run, will lead to a further degradation of the game. Stupid, stupid, stupid.
Posted by Jeff Vaca at 9:34 AM No comments:

Your Chances of a White Christmas 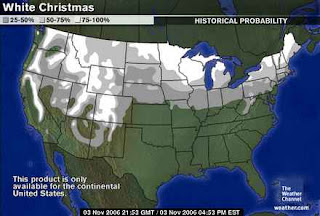 The rest of us, we'll have be satisfied with "if only in my dreams..."
Posted by Jeff Vaca at 5:13 PM No comments:

Although I admit that I'd never heard of the baiji until I read the article in tonight's newspaper, I still find this incredibly depressing.

Think about it. A species that has existed for 20 million years, gone forever because of its inability to survive in (or adapt to, depending on your point of view) a degraded environment brought about by the modern industrial age.
Posted by Jeff Vaca at 8:54 PM No comments: 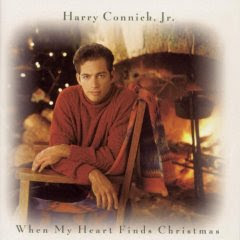 Over the course of 14 songs, Connick Jr. manages to succeed on several levels: swinging in the style of Billy May-produced Sinatra (Sleigh Ride, Let It Snow! Let It Snow! Let It Snow!, Rudolph the Red-Nosed Reindeer), Andy Williams-style crooning (Christmas Dreaming, which even sounds like it might have been backed by the Percy Faith singers), and hip jazzster (I Pray On Christmas, What Are You Doing New Year's Eve?). The Connick Jr. originals are among the strongest songs on the album, and with It Must've Been Ol' Santa Claus, Harry contributed a song to the holiday pantheon that will still be listened to, and enjoyed, for decades to come.
Posted by Jeff Vaca at 8:48 PM No comments:

The Andy Williams Christmas Album. For many baby-boomers, the name Andy Williams is probably synonymous with a series of saccharine Christmas specials that would appear, like clockwork, on an annual basis in the 1960s through the mid-1970s. The whole family would be there - wife Claudine Longet, the kids, the Osmonds, and a host of others whose names have been lost to history (at least, I can't remember them).


But even though Williams was no Sinatra, his Christmas album - his first, the one with the red cover - is better than Frank's. A lot better. Originally released in 1963, it was re-released two years ago by Sony Music in a newly remastered version that sounds as if it was recorded just yesterday. Of the thousands of Christmas albums that have been released over the years, this is the definitive easy-listening crooner holiday album.


Like many Christmas albums originally released on vinyl, the record is neatly divided between secular songs on Side One, and religious songs on Side Two. On the first side Williams tackles the two major classics of the mid-twentieth century - White Christmas and The Christmas Song - and fares just fine. It might be sacrilege to suggest that either is definitive, but he comes close enough to make it a moot argument. In the meantime, Williams comes up with two classics that, to this day, are probably more closely associated with him than with any other singer: the Happy Holiday/The Holiday Season medley, and It's the Most Wonderful Time of the Year. The side is rounded out by an alternative version of The Twelve Days of Christmas called A Song And A Christmas Tree, which I guarantee will prompt any child under the age of 10 to comment, "he's not singing it right." The side closes with Kay Thompson's Jingle Bells (in what I assume is a reference to the arranger; there are no liner notes on the original or remastered versions), a raucous, swinging version that can give Brian Setzer a run for his money any day of the week.


The highlight of side two is O Holy Night, but Williams also turns in terrific (and understated) performances on The First Noel, Away in a Manger, and Silent Night. The only stinker on the album is a song called Sweet Little Jesus Boy, which has a nice melody, but you don't want to listen too hard to the lyrics. My guess is that it's the only song in existence that refers to Jesus Christ as "sir."


Overall, a classic then and a classic now. A note of caution - there are many cut-rate discount CDs marketed under this title. Aside from the original, they are all terrible. Avoid them like the plague!
Posted by Jeff Vaca at 11:49 AM No comments:

The Best Article You'll Ever Read About the BCS

Courtesy of The Onion.

"I think this year more than any other year proves that the BCS is working," ESPN College GameDay anchor Lee Corso said during a live broadcast from Ohio State's campus. "The system does an excellent job taking into consideration things that poll voters don't even think about: strength of schedule, whether or not the team won their conference, total distance the teams' fans are willing to travel for bowl games, average amount spent on souvenirs by alumni, and grade point average. After all those things, it's Ohio State, baby. And only Ohio State."

Corso then put on the costume head of Ohio State mascot Brutus Buckeye and was met with cheers from thousands of students.

The scary thing is, I can actually picture him saying that.

And no Onion article on College Football would be complete without a dig at Notre Dame:

All coaches interviewed supported Meyer's claim, with the notable exception of Notre Dame head coach Charlie Weis, who said that despite his team's two losses, weak schedule, and unremarkable defense, he still felt in his heart that Notre Dame deserved a chance at the title—a feeling that, according to a BCS official who wished to remain anonymous, was not completely overruled.

"First of all, I should note that although Notre Dame is an independent, and a highly regarded independent at that, it does not have its own special set of rules as far as determining its football team's rankings," the official said. "Instead, we use a special set of mathematical algorithms to determine its football team's rankings, which the BCS specifically determines only after ranking all the other teams. And though I shouldn't say this, we—er, the computer—would have dearly loved to have seen Notre Dame in the championship." 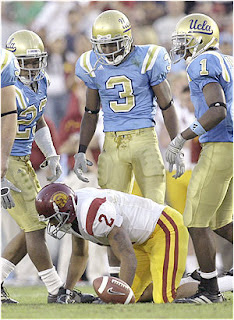 FIVE in a Row!

Those are the two periods in the history of the Big Game that Cal has defeated Stanford five consecutive times. Coming on the heels of seven straight losses to the Cardinal, it is especially gratifying to be able to say that an entire graduating class at Stanford will go through life without ever having won a Big Game. Sorry if that sounds harsh, but this is life and death stuff, folks!
Unfortunately, for me it wasn't quite the same this year. With the addition of a game to every Pac-10 team's schedule this year, the Big Game was moved from its customary spot - the Saturday before Thanksgiving - to the first weekend in December. Unfortunately, because our Annual Conference coincides with that date, I had to miss being there in person in Berkeley for the first time since 1984. For the past 20 years, a friend (and Stanford season ticket holder) and I would leave Sacramento early in the morning, spend a couple of hours perusing the stacks at some of the used book stores on Telegraph Avenue (Moe's, Shakespeare, some others) and then walk up to the Stadium for the game.
Driving home from San Francisco late yesterday afternoon, I listened to Joe Starkey's post-game show, featuring the annual interviews with seniors who were playing their last game at Memorial Stadium. This year, it felt odd - not quite right.
But in the end, all is right with the world. The Axe remains in Berkeley for another year.
ROLL ON YOU BEARS!
Posted by Jeff Vaca at 1:14 PM No comments: