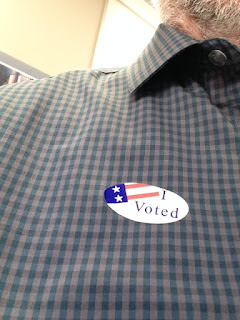 But for whatever reason, Election Day has always held a special place in my heart, to the point where I once told a colleague that it was like Christmas, Thanksgiving, Independence Day and my birthday all rolled into one.  Of course, presidential election years are the biggies, and pieces of each of those election nights remain ingrained in my memory as if they occurred just yesterday.

On Election Day in 1968, we got a cat and named him Hubert, which probably tells you a little bit about our political leanings.  It hadn't fully sunk in yet, but my family had been Nixon-haters for a long time, ever since he dubbed Helen Gahagan Douglas "the pink lady" in his first Congressional campaign.  They were all hoping that when Nixon uttered the immortal line, after having been defeated in his run for Governor of California by Pat Brown, that "you won't have Dick Nixon to kick around any more," he was telling truth.  As time would tell, Nixon and the truth had a fleeting relationship.  That night, mom and dad let me stay up until 11 p.m., and at that point the networks weren't even close to calling a winner.  We wouldn't even know who our next President would be when we woke up the following morning.

It was a bit of a different story in 1972.  The family had gravitated towards George McGovern around the time of the California Primary, but after his victory here it was all downhill.  His acceptance speech at the Democratic Convention aired after 2 a.m. EST, he had to drop his running mate after it became know he'd gone through electroshock therapy earlier in his life, and...well, nothing much good happened after that.  Needless to say, it was a very disappointing Election Night, with the outcome known before we had finished dinner.

After Watergate, 1976 was tailor made for a Democratic candidate, but it ended up being a nail-biter with Jimmy Carter eking out a late call over President Gerald Ford.  Truth be told, I was never that enthusiastic about Carter as a candidate or a President; it wasn't until he became the model for what an ex-President could accomplish after holding the office that his value truly sunk in.  But while in office, aside from the genuine triumph of the Middle East accords, it always felt a little bit like Carter had filled his Cabinet with a bunch of dudes who didn't know what they were doing.  Oh well.

By the Fall of 1980, I was more or less safely ensconced at UC Berkeley, and the best and most lasting memory of that election season was that I saw my first Bruce Springsteen concert the night of the Reagan-Carter debate.  On Election Night, I joined a somewhat desultory "protest march" that was a far cry of the campus' reputation for political engagement.  But if nothing else, it was the first presidential election I'd voted in, and even though most of my dorm mates were casting their lot with John Anderson (remember him?) I stayed loyal to Jimmy Carter, even given my misgivings about his performance in office.

1984.  What to say?  Not much drama on THAT election night.  Walter Mondale was a good man and you had the history of Geraldine Ferraro being on the ticket, but no one was going to take out the Gipper that year.  Little drama again in 1998, and in retrospect it seems pretty clear that Dukakis lost the election at the moment he (or someone) thought it was a good idea to put on a funny looking helmet and ride around in a funny looking tank.  The other thing that sticks in my mind about that campaign is Dukakis appearing on "Nightline" about a week before the election, and appearing to be in absolute denial about what was going to happen the following week.

1992.  Finally, I vote for a candidate who becomes President.  The strongest memories I have of this campaign are associated with the debates, particularly the legendary moment when President Bush looked down at his watch as if he had somewhere else to be at the moment.  My election night memories mostly center on Clinton and Gore speaking to the crowd in Arkansas with the strains of "Don't Stop" blaring on the loudspeakers.

1996.  This was the first election night that I spent at the CSU office monitoring election returns on the Internet, but mostly with a focus on the state races.  Clinton's victory over Dole was a foregone conclusion long before Election Day, but the night was still memorable because the Democrats managed to regain the State Assembly, after having lost it as part of the Republican tidal wave that swept the country in 1994.

2000 was the Big Kahuna, the election night to end all election nights.  My colleague Dustin Johnson and I were again at the CSU office, sitting with a pizza in our conference room armed with six laptops setup to various election websites in the state and across the country.  Who knew that after six hours, following some of the most entertaining Dan Rather commentary ever uttered on television, that we'd be frantically scouring Florida's Secretary of State's site for more information on the vote count in that state.  I remember staggering home at around 2 a.m., and staggering out of bed at 6 to see if anything had changed.  It hadn't.

You know, I can't really say I remember much about 2004.  I was never enthusiastic about John Kerry, and even though a lot of pollsters seemed to think that he had a shot, it always seemed like a foregone conclusion that George W. would be elected to a second term.

But there was a lot to remember about 2008.  It was the first campaign where my sons were paying attention (even though they were still too young to vote, Son #1 missing by just a couple of months), and it didn't take long for them to become fans of Barack Obama.  Election night was one of those rare nights where you just cherish the opportunity to view history as it is taking place.  Of course the hopes surrounding Obama at that moment were unrealistic, and there are a few things that I wish he'd done differently.  But like him or not, he was a once in a generation President - completely at ease in the job, and utterly commanding in his projection of what it means to be a leader.  There won't be another one like him for a long time.  2012 was a muted version of what had occurred 4 years earlier, with a touch of drama because of the President's horrible performance in the first debate which made it seem possible that he could lose.

Which brings us to this year, which I'm going to save for another post.