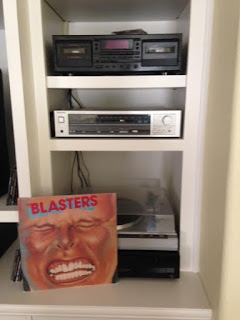 If you sit down and think about the albums that came out in 1981, "The Blasters" is probably not going to be one that comes immediately to mind.  The record sounded out of place back then - solid, basic rock 'n roll, two guitars, bass, piano, drums - but it probably would have sounded out of place in any era, except maybe 1957-58.  But on the other hand, you could argue that Blasters music is timeless music, because there will always be a place for great rock 'n roll, no matter what the trends of the day might say.

They shared (at least at first) a label with X, another band from Los Angeles.  The fact that those two bands could even be considered part of the same broad genre of music is a testament as to why rock is such a glorious medium - a big tent where, at least in theory, everyone can find a home.

If there was any justice in the world, The Blasters would have been inducted into the Rock and Roll Hall of Fame a long time ago, but since we know there isn't we're left to wonder at the miracle of a band that produced in little more than three years a body of work - this album, "Non-Fiction," and "Hard Line" - that can stand proudly with the best of that decade.  And they're still out there, playing shows and making a go of it.  They're in it because for them, it's a way of life.

There are five great cover songs on the album, but as good as they are (and "I Love You So," "I'm Shakin'," and "Stop the Clock" are all amazing) they can't stand a candle to the Dave Alvin originals. When you listen to songs like "Border Radio," "American Music," "This is It," and especially "No Other Girl," what immediately becomes evident is that Alvin is a great songwriter - as tight and concise as these songs are, they tell stories.  Just consider this snippet from "No Other Girl," which I'd argue is their masterpiece:

But the lyrics are only part of the story.  You need to listen closely to the interplay between Dave and Phil Alvin's guitars, the way the bass and drums propel it all (with some particularly well-timed cymbal crashes), the sheer perfection of the boogie-woogie piano, and the terrific vocal from Phil Alvin - that too tells the story of The Blasters.

There were some pretty great records released in 1981, including one in particular from their Slash label-mate - but there's little doubt that "The Blasters" was one of the best.
Posted by Jeff Vaca at 3:33 PM No comments: 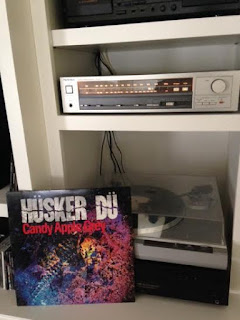 Around the time that Prince was rewriting the history of rock 'n roll in Minneapolis, there was another band from that town doing everything they could to become, at the very least, a footnote.

Husker Du is probably one of the best examples of what Robert Christgau called "semi-popular music." Whether you called them post-punk, alternative, hardcore or something else, they were never going to top the charts - their music was just too loud and too rough, for lack of a better term.

"Candy Apple Grey" was their best selling album, their major label debut, and the highest it got on the charts was #140. All you really have to do to figure out why that was the case is to listen to the album's first song, "Crystal." It's a sonic explosion with what sounds like a wall of guitars, and then Bob Mould starts singing, and he sounds a bit like Joy Division's Ian Curtis after gargling with broken glass. You weren't going to find anybody humming this one.

If the album had been comprised entirely of Mould songs, it might have been too much to take, given his intensity level. Drummer Grant Hart's songs, while equally loud and (for the most part) unhappy, are more melodic and strike a balance that makes the record, at least to these ears, their best.

One thing's for sure - it definitely sounds great turned up real loud on a rainy day. 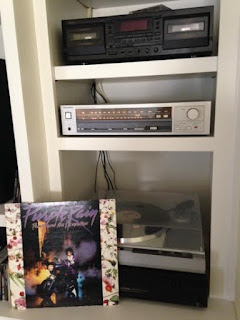 The greatness of "Purple Rain" was evident upon the very first listen.  Prince had made some excellent albums before its release in 1984; "Dirty Mind," "Controversy" and "1999" were all landmarks in their own right.  But nothing (well, maybe "Little Red Corvette") could prepare you for what you heard on "Purple Rain."

It's a little thing, and it comes on what few people (if any) would claim is the best song on the album, but there's a moment on "Take Me With U," the second song on Side One, which stuck with me the first time I heard it and still resonates today.  Towards the end of the song, Prince tells the object of his affection (presumably, Apollonia), "You're sheer perfection," and in the background you hear a softly spoken "thank you."  I'm not sure why that one moment has stuck with me for 32 years, but it was right then and there that I knew that the record which was playing was a masterpiece.

And make no bones about it - this isn't just a great record.  This is one of the greatest records in the history of Rock 'n Roll, Pop, Soul, R&B, any moniker you want to give it.  I was almost afraid to write about "Purple Rain," because something this great is almost intimidating.  When art as glorious as "Purple Rain" enters the world, it's difficult to even wrap your head around it - the history of rock 'n roll is filled with miraculous moments, but when one album is comprised of one miracle after another, it's a bit scary.  And you can only shake your head in wonder.

Prince would make great albums again, and continue to be one of the most vital artists of his generation.  But as great as he and his work was, he never produced a work that was better than "Purple Rain."  And that's OK, because a record as great as "Purple Rain" deserves to have its place on the mountaintop.
Posted by Jeff Vaca at 5:03 PM No comments: