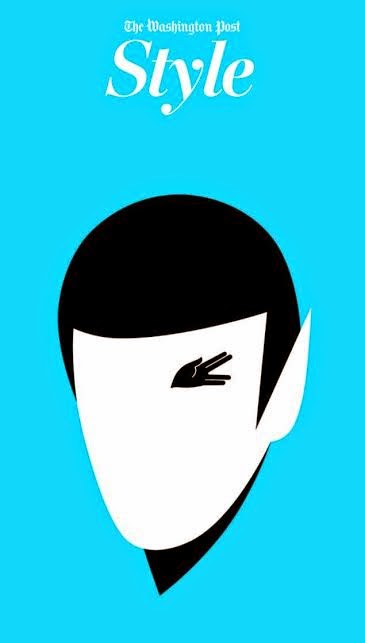 The life of Leonard Nimoy strikes me as the very epitome of a life well lived.  Over the course of an acting career that spanned decades, he was blessed with the role of a lifetime, one that he appeared to struggle with at first but came to embrace over time.  Based on the accolades accorded him upon his recent passing, he was a consummate professional, dedicated to his craft but also respectful of others, easy to work with, and generally a delight of a person.  He used his fame to do good work, whether in the field of acting, directing, photography or to work for the causes he cared about deeply.

And about that role of a lifetime - without question, one of the greatest characters of my lifetime, right up there with James Bond, Indiana Jones, Tony Soprano, Mary Richards, and perhaps a handful of others in terms of popularity and importance in popular culture.  Mr. Spock isn't just a character; he is an icon.  For an entire generation, the words "live long and prosper" will always have a special meaning, more than likely one that began in childhood.

I didn't get to see a lot of Star Trek during its original run, because it was on after my bedtime, but it didn't take long for the program to show up in syndication during the afternoon, when it became a staple of my and my brothers' daily routine.  There was a time when I could recite the titles of every episode in order, and we liked the bad (most of the third season) as well as the good (nearly the entire first season, much of the second).

I had the pleasure of hearing Mr. Nimoy speak in person in 1976, when he was promoting his book of poetry,  "I Am Not Spock."  Of course, all I (and the other 16 year old kids there with me) really wanted to hear was stories about Star Trek, and he did tell one or two.  And then, near the end of his presentation, a loud an unexpected sound came from the ceiling of the auditorium that caught us all by surprise.  He paused for a moment, looked up and said "I'll be right there, Captain," which of course brought the house down.  Years later he would publish a memoir, and it would be called "I Am Spock."  Of course, that was not all he did (during the interim, he directed "Three Men and a Baby," a huge box office hit), but he knew that it was for his role as Spock that he would always be best known.  And that was OK.

And clearly, he had a wonderful sense of humor, as well as an ability to laugh at himself, as evidenced in this terrific advertisement he filmed a couple of years ago with Zachary Quinto, the young actor to whom he became a mentor - and who assumed the mantle of Mr. Spock in the new series of films.

He lived long and prospered.  May he now rest in peace.
Posted by Jeff Vaca at 1:50 PM No comments: