NFL Memories and "The Football Book" 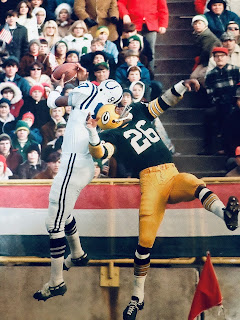 A few years ago, one of my Christmas "stocking stuffers" was a coffee table book on the history of the NFL.  Cleverly titled "The Football Book" and published by Sports Illustrated in 2006, the book includes article excerpts from several of the great football writers who graced the pages of SI, including Paul Zimmerman, Peter King, Dan Jenkins and Michael Silver, as well as the great feature writers George Plimpton, Gary Smith, Frank Deford, and S.L. Price.  The book also includes Dr. Z's (how Zimmerman was known to his biggest fans) indispensable All-Decade Team choices, which are guaranteed to be the perfect argument starter.

But as good as the writing is, the highlight of the book is the photography, which shouldn't come as a shock given that the "Illustrated" part of SI was always key to its enormous success.  The photograph at left was taken by Neil Leifer, who, over the course of a career that spanned several decades, earned the right to be called a legend.  It's a wonderful photo that evokes both the effort and grace that is involved in the game of football, but is also evocative of the atmosphere at Lambeau Field, longtime home of the Green Bay Packers.

What made this photo of particular interest to me is that it comes from the first NFL game that I have a memory of watching.  The game was played on Saturday, December 7 in 1968 (the year the Colts went 13-1, and were then upset by the Joe Namath-led New York Jets in the Super Bowl).  My dad drove over to a friend's house to watch it, and for some reason brought me with him.  I'm not exactly sure why I remember all this, but that's the strange way my mind works sometimes.

Albums of the Year: Finalists

With the help of Spotify, there's no question that I listened to more new music this year than ever before.  On the one hand, that's a great thing.  On the other, it did make me wonder if there was such a thing as "too much music."  It's my own fault, but I found myself too often reaching for the shiny new object (i.e. that week's new releases), and not spending enough time doing a deep dive into those albums which I enjoyed the most.

By the end of the year, I think I'd figured it out.  But there are still going to be a lot of 2020 albums that end up on my "subjects for further research" list.

This list is the list from which my year-end Top Ten will come.  That will be, and this is a promise that will be kept, sometime during the holiday break - and definitely sometime before year's end.

My picks for the best of 2020, with further refinement to come:

Bruce Springsteen, Letter to You

Emma Swift, Blonde on the Tracks

Jason Isbell and the 400 Unit, Reunions

Sarah Jarosz, World on the Ground