The Essential Christmas Albums, according to Jeff 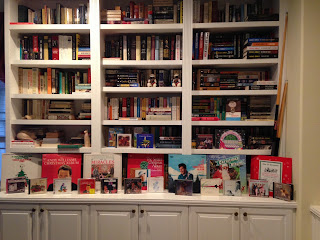 I've been saying this for a while, but I'm bound and determined to get this ship sailing again.  Whether it's college football, this year's films and records, the petulant 9-year old that this country saw fit to elect as President of the United States, or the amazing transformation that is taking place in the work places of America (thanks to some very brave women), there is no shortage of things or issues to write about.

But let's start with something to - hopefully - get everyone in the mood for the holiday season.  No doubt there are some of you out there who have no use for Christmas music, and if that's the case you should stop reading now.  Let's just say that I'm a fan, although I'm not one of those who begins to listen incessantly as soon as Halloween is in the rear-view mirror.  (Although to be completely transparent, I did finish my annual compilation CD in July).  For the past 11 years, I've made a compilation CD of Christmas music for my friends and colleagues - a mix of the sublime, the ridiculous, the well-known, and the completely obscure.  With each passing year finding the obscure becomes a little more difficult, particularly since the demise of a couple of blogs that I relied on heavily to pad out the REALLY obscure stuff.  But no matter, now I lurk in the used Christmas sections of the few remaining record stores that exist in Sacramento.

It's not easy to find a non-compilation Christmas CD that is a consistent killer from first track to last.  Below are those that I turn to most often, the ones that to these ears come closest to that high standard.  And even the compilation CDs can be hit-and-miss - for example, there's never been a perfect "Very Special Christmas" collection - but every one has a high spot that makes the entire package worth whatever you spend for it, especially if you can find them in the used bin.

These are in no particular order; it would be splitting hairs to the extreme to try and pick between some of them.

The Andy Williams Christmas Album.  Andy Williams was a great entertainer for a long time, but few (any?) would argue that he had a body of work that matched that of Frank Sinatra.  But there's no question that Andy's Christmas album was better than Frank's.  I would have loved to hear a Sinatra holiday record that was produced by Nelson Riddle, but he chose to do one with his "dark night of the soul" producer Gordon Jenkins.  I know some people swear by it, but I am not one of those people.

Williams, on the other hand, goes with the classic "secular songs on side one, religious songs on side two," and it nearly all works.  His recording of "White Christmas" rivals that of Bing's, and his recording of "The Christmas Song" rivals that of Nat King Cole.  And no one has ever done a better version of "The Most Wonderful Time of the Year," or the "Happy Holidays/The Holiday Season" medley.  Andy also does a great job on the religious chestnuts, including "The First Noel," "O Holy Night," and "Silent Night."  The only real misstep is "Sweet Little Jesus Boy," which I believe remains to this day the only song that refers to Jesus as "sir."

Christmas at King's, The King's College Choir, Cambridge.  Every collection should have at least one recording by the King's College Choir, and one by the Mormon Tabernacle Choir.  The MTC recording that my parents owned on vinyl was awesome, but I've never been able to find it on CD.  Unfortunately, the one recording of theirs that I have is way too heavy on the organ, which is not what you want to hear when you're listening to the Mormon Tabernacle Choir.  The King's College recordings, which I have on a CD that includes songs recorded from 1959-65, is perfect - 35 songs in all, with the well-known carols on one CD and the lesser known songs on a second.  It's all great.

A Charlie Brown Christmas, Vince Guaraldi Trio.  This isn't just a great Christmas album.  This is a landmark album, period - one of the best in any genre released in my lifetime.  I'm just going to take a wild guess that you've heard it.  If not, please remedy that as soon as possible.  The pairing of Vince Guaraldi and Charlie Brown may have been a happy accident, but so is the fact that we are all here.

Elvis' Christmas Album.  OK, I admit that I laughed out loud the first time I heard Elvis sing "Blue Christmas."  What can I say?  I was young and stupid.  This would be on the list if it was just that song, plus "Santa Claus is Back in Town" - just one of the two best rock 'n roll Christmas songs of all time.  But that Elvis kid could sing a bit, you know?

A Christmas Gift For You From Phil Spector, aka Phil Spector's Christmas Album.  It had the misfortune to be released the holiday season after President Kennedy was assassinated, but was already a legend by the time I was in high school in the 70s.  From the incomparable Darlene Love ("Christmas (Baby, Please Come Home," the other greatest rock 'n roll Christmas song of all time) to the Ronettes to the Crystals to Bobb B. Soxx and the Blue Jeans, it all works.  Even Phil's spoken "Silent Night" at the end is moving.

A Christmas Together, John Denver and the Muppets.  Scoff if you must, but just know that the version of "Have Yourself a Merry Little Christmas" sung by John and Rowlf (Jim Henson) is one of the best versions of the tune ever recorded, that "Noel: Christmas 1913" is perhaps the best hidden holiday treasure of all time, and that the whole enterprise is one of the best distillations of the Christmas spirit ever committed to vinyl.

The Christmas Song, Nat King Cole and Merry Christmas, Bing Crosby.  There's a reason that these are perennial favorites, and it goes beyond their inclusion of what are almost certainly the two most famous pop Christmas songs ever written.  They could both sing as if their lives depended on it, and their choice of songs ranges from outstanding to inspiring.  You must have these in your collection.

December, George Winston.  The album that put Windham Hill Records on the map.  Pristine beauty and profoundly moving.  Solo piano, for those of you not familiar with the artist.

We Three Kings, The Roches.  This is another album, like Guaraldi's that transcends the theme.  The Roches and Christmas songs were made for each other, and this is an album that I'll never tire of.

Carols, Sandy Owen.  Also solo piano, and good luck finding this one.  Owen is not quite the virtuoso that Winston is, but suffice to say that he's more than good enough.  Wonderful from start to finish.

The A Very Special Christmas series.  As I wrote above, none is perfect from start to finish, but there's something on each that makes them worth owning.  Perhaps a little later this season (I know better to make promises about future blog posts), I'll put together a "Best of" compilation.  It would be killer.

When My Heart Finds Christmas, Harry Connick Jr.  I think Harry has released four Christmas albums now, but the first is the best.  Among others, it includes "(It Must've Been Ol') Santa Claus," one of the best modern-day pop Christmas songs, "Christmas Dreaming," a great throwback tune that would have sounded great in every decade of the latter half of the 20th Century, and a near-perfect version of "What Are You Doing New Year's Eve?"

The Narada Christmas Collection, Vol. 2 and The Carols of Christmas, A Windham Hill Collection.  New Age music isn't exactly my thing (although I do enjoy George Winston's albums), but in many cases it works really well on Christmas music.  And if instrumental holiday tunes are up your alley, then you should definitely check these out.

The Bells of Dublin, The Chieftains.  The legendary Irish band provides the music, with a variety of singers - some obvious, some not - provide the vocals.  I've probably used about half of the album's songs on my annual compilations, and I'd be hard pressed to choose my favorite.

Christmas + Santa Fe, Ottmar Liebert.  Liebert is a guitarist who falls under the New Age umbrella, and has recorded three holiday albums.  I really like the way that he combines a well-known Christmas song with a section that he wrote himself.

Barenaked for the Holidays, Barenaked Ladies.  I'm not even sure how I ended up buying this album - I've enjoyed a Barenaked tune on the radio every now and then, but would hardly call myself a huge fan.  But this is a real winner, an eclectic mix of standards, original tunes, and damn funny asides - the funniest being "Deck the Stills," which consists entirely of the band singing (a capella, even) "Crosby, Stills, Nash & Young" as if it were a Christmas carol.

Songs for Christmas and Silver & Gold, Sufjan Stevens.  Stevens is like me, except way more talented, so he records his own Christmas compilations and then gives them to friends for a present.  Each of these is a five-disc set, and while each of them has at least one disc that is a bit spotty, both are well worth the effort to find the gems.  Especially on Songs for Christmas, the first collection, there are a lot of them.

Christmas Caravan, Squirrel Nut Zippers.  This is a wild one, and a fun one to boot.  Everything from "A Johnny Ace Christmas" (just Google his name) to "Carolina Christmas," to "Hot Christmas," and a version of "Sleigh Bells" that features nothing but brass.

A Christmas Celebration of Hope, B.B. King.  This one snuck up on me, and only after I'd included about half-a-dozen of its songs on my compilations.  An incredible album from the old master.

Christmas, Chris Isaak.  I think this might be his highest selling album, which is kind of a bummer when you consider the entirety of his career but kind of cool because it also is likely to provide an ongoing revenue stream sufficient to keep him afloat for however long he decides to continue in the music biz.  He seems to have embraced it, going on a Holiday Tour each year.  It's a fun album, and is great to have on in the background of a Christmas party.

Quality Street, Nick Lowe.  Yep, we always knew that the old warhorse Nick Lowe was going to cap his career with one of the best Christmas albums of the 21st Century, right?  Well, it's a winner.

And that is probably enough to get you started.  Feel free to share your own favorites!
Posted by Jeff Vaca at 6:04 PM No comments: