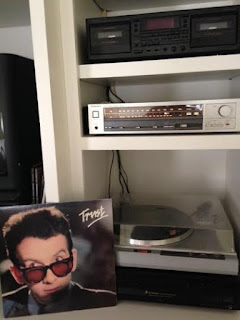 From time to time, I wonder whether Elvis Costello’s career would have survived his “drunken racist incident” in this modern era of social media, TMZ, Hollywood Access et al.  The intervening years have clearly shown that Costello is not a racist (nor for that matter, did the years before), but on the other hand he did say some genuinely horrific things in his drunken state on that night in 1979.  And if you have no idea what I’m talking about, just Google “Elvis Costello Repents” and read his 1982 Rolling Stone interview with Greil Marcus.  Marcus doesn’t let him off easy, and notwithstanding the interview’s title, I’ll leave it to each individual reader to decide whether Costello really does explain himself to any degree of satisfaction.

By the time “Trust” was released in 1981, the story was off the front pages, and the days of “Angry Young Elvis” – when he might show up for a concert, play 20 minutes and then storm off the stage – were over.  And while “Trust” wasn’t quite as angry an album as “This Year’s Model” (what could be?), it had its share of venom.  In retrospect this feels like a transitional album, taking the first steps from that earlier, angrier era to the second stage of his career, where at times it seemed as if he wanted to become the Cole Porter of his time.  For my part, I’ve always loved the album – and so did just about all of my friends in Deutsch Hall (UC Berkeley) that Spring.  There were days when you could stop on four different floors in our dorm, and “Trust” is what you’d hear playing.  My only regret is that, still a little spooked by the stories of 20 minute shows and doing my best to protect my pocketbook, I passed up on the opportunity to see what I’m told was a great show that April in San Francisco.

Christgau: A. “…here he makes the music make the words as he hasn't since This Year's Model. This is rock and roll as eloquent, hard-hitting pop, and Elvis has turned into such a soul man that I no longer wish he'd change his name to George and go country.”
Posted by Jeff Vaca at 11:16 AM No comments: 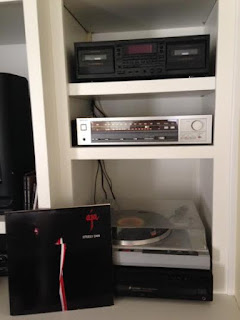 “Aja” is the album where Steely Dan gave up all pretense of being a real band. Donald Fagen and Walter Becker had been heading in that direction since “Pretzel Logic” three years before, steadily moving towards the sound that Robert Christgau referred to as “well-crafted West Coast Studio Jazz.”

Consider for a moment the fact that “Aja” came out the same year as the debut albums from The Clash, Talking Heads, Blondie, Elvis Costello, not to mention “Rocket to Russia” by the Ramones and the Sex Pistols’ “God Save the Queen. The difference in sound on “Aja” from those albums is so stark that it might as well have come from a different planet.

And as much as I love all of those albums, I also love “Aja.” For me, it’s the one time that Fagen and Becker perfected their “West Coast approach.” “The Royal Scam” sounded a little thin to these ears, and “Gaucho” was expertly crafted but ice cold in the heart department. But the seven songs on “Aja” wear their heart on their sleeve to such a degree that…well, let’s just say that sometimes I wonder whether that was really the intent, and if the album was an accidental masterpiece.

But never mind all that. The entirety of the first side is spectacular, even with just three songs – “Black Cow,” the title track, and the immortal “Deacon Blues” (with the line about the Alabama Crimson Tide more relevant than ever in the 21st Century). The second side isn’t quite as good, but has the hits (“Peg” and “Josie”) and manages while barely breaking a sweat to maintain the sound and approach begun on Side One.

1977 is one of my favorite years in music history because it was all over the place. And “Aja” was a big part of that.

Christgau: B+. “I hated this record for quite a while before I realized that, unlike The Royal Scam, it was stretching me some; I still find the solo licks of Larry Carlton, Victor Feldman, et al. too f*cking tasty, but at least in this context they mean something. I'm also grateful to find Fagen and Becker's collegiate cynicism in decline; not only is "Deacon Blues" one of their strongest songs ever, it's also one of their warmest.” 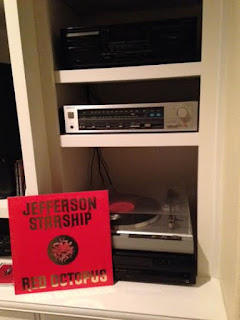 Album of the Day - "Hotter Than July," Stevie Wonder 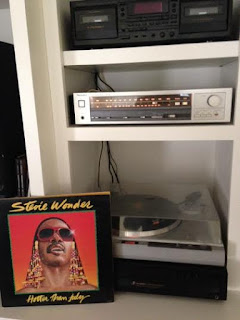 “Hotter than July” always makes me think about the difference between saying that an album is an artist’s “best” as opposed to “my favorite.”

My head says that Stevie Wonder’s “best” album is either “Songs in the Key of Life,” or “Innervisions,” or “Talking Book,” or “Music of My Mind.”  But my heart is clear – my favorite Stevie Wonder album is 1980’s “Hotter than July.”

From start to finish, the album is a winner – great fast songs, great mid-tempo tunes, and a classic ballad.  It’s got “Master Blaster,” it’s got “Happy Birthday,” it’s got “Lately,” and a host of other instant classics.  And it features Stevie playing with a full band, one that keeps topping itself with each song.

Trust me, you can’t go wrong with this one.

Christgau: A-.  “Between his free-floating melodicism and his rolling overdrive, his hope and his cynicism, he seems more and more like the best thing the '60s ever happened to. Sure outlasted Jerry Garcia, now didn't he?”
Posted by Jeff Vaca at 8:14 PM No comments: 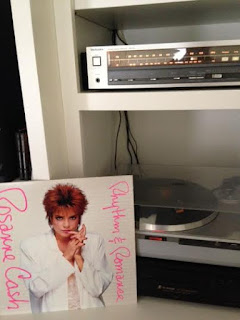 I imagine that when Rosanne Cash looks at this album cover, she has a good chuckle.  The look – hair color, hair style, and outfit – just screams “1986!”  But since that’s when the album came out, I guess it shouldn’t come as much of a surprise.

Rosanne Cash has been a favorite of mine since her very first record, 1979’s “Right or Wrong.”  And although she released one of the great singles of all time (“Seven Year Ache,” just a magnificent, magnificent song) in 1981, it was on “Rhythm & Romance” that she really found herself.  This was her first great album – after this one, “Johnny Cash’s daughter” was no longer the first thing someone said in trying to describe her.

And although there were even greater albums to come, there are times when I miss the rocking nature of “Rhythm & Romance.”  About the only criticism I’ve directed towards her later work is that there are times when producer John Leventhal gets a little too pristine with his production.  On “Rhythm & Romance,” Rodney Crowell has the band go full rock & roll mode, and with players like Waddy Wachtel, Larry Crane, Bob Glaub and Anton Fig, that’s not much of a problem.

And Cash’s songwriting really blossomed, with tunes like “Hold On,” Halfway House,” “My Old Man” and “Never Gonna Hurt” (which sounds just as new wave as much of what was being played on the radio at the time).  But the album’s highlight may be her cover of John Hiatt’s “Pink Bedroom,” where she pretty much takes the song away from Hiatt and makes it her own.

This, folks, is a great one.

Christgau: A-.  “Nobody’s going to mistake this one for a country record, not with Waddy Wachtel’s hooks bobbing by like bull’s eyes in a shooting gallery. But it’s not just another compulsorily catchy stab at immortality either. Cash may have her eye on MTV, but she’s a child of Nashville nevertheless--when she cheats she knows it’s wrong even if she’s got a right, and when she sings she hurts.”
Posted by Jeff Vaca at 7:51 PM No comments:

Album of the Day - "Against the Wind," Bob Seger 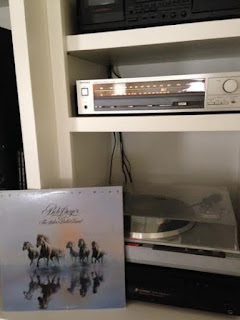 Dave Marsh is probably as big a Bob Seger fan as has ever walked the Earth, and he hated “Against the Wind.”  I mean, really hated it.  To wit:

“I’d like to say that this is not only the worst record Bob Seger has made but an absolutely cowardly one as well.”

“As music, “Against the Wind” is heartless and mediocre...all that Seger risks here is his credibility, and that accidentally.”

I bought the album upon its release in the late Spring of 1980, and although I really miss the days when Rolling Stone would actually publish a review like the one quoted above, I never quite understood the venom behind Marsh’s review.  There’s part of me that wonders whether it was fueled in part by Seger choosing to work with Bill Szymzyck, the long-time producer of the Eagles.  It may seem hard to believe for those who weren’t there at the time, but Rolling Stone and the Eagles had a big feud going in the late Seventies, for reasons that 35 years later have faded into the mists of my memory.  But the fact that a bonafide rocker like Seger would associate with the “El Lay crowd” may have contributed to Marsh’s disdain for the record.

Well, there’s no question it’s slick and there’s nothing here that holds a candle to “Night Moves,” “Feel Like a Number” or “Turn the Page, but I’ve always liked the album.  Songs like the title track, “No Man’s Land,” “You’ll Accomp’ny Me,” “Long Twin Silver Line,” “Fire Lake” and “Betty Lou’s Gettin’ Out Tonight” always struck me as, if not quite among his best, pretty darn fine.  As an album it’s not “Night Moves” or “Live Bullet,” but neither is it the disaster that Marsh painted it to be.

And in the “also not a fan” department: