Notes on an epic sports night 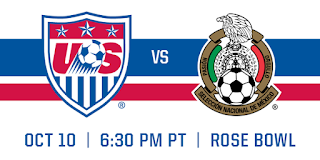 As I've written before, October is the best month of the year for avid sports fans.  You've got the heart of the college football season, you've got the NFL moving into "mid-season form" (as the saying goes), you've got the MLB playoffs followed by the World Series, and you've got a whole bunch of other fun stuff.

But it's rare that the stars align the way they did last night - a night that TV remotes were invented for.  At one point, all of the following events were being televised, which in and of itself would have been a fun night.  If one or two of them had been dramatic, that would have been really cool.  As fate would have it, all of them were dramatic, and a couple of them went well beyond that.

- U.S.-Mexico soccer: I'm a casual soccer fan, knowing just enough about the sport to be dangerous.  But I understand spectacle when I see it, and last night's game in front of more than 90,000 delirious fans (about 3/4 of whom appeared to be solidly behind Mexico) at the most iconic sports stadium in the country (the world?) created an atmosphere that went well beyond what you normally see, at least in this country.  Frankly, I'm not even sure I completely understand what was at stake last night, although I know that we never like to lose to Mexico, particularly on home soil.  All you had to do was watch the players and the fans to know what was really at stake, and the game delivered on all fronts.  I'm not sure I've ever seen three goals scored in extra time, and although we came out on the short end of a 3-2 game, it was sure fun to watch.

- L.A. Dodgers, leg breakers: Before Dodgers fans jump all over me, let me just say this - whether Chase Utley's play was legal, within the rules, indicative of an era when men were men, or just a sign that the Dodgers realize that they've got to do something to overcome the fact that Clayton Kershaw is the Bizarro World Bumgarner - is irrelevant.  In the big scheme of things, MLB will realize that its assets are the players, and that they can't allow their players to be injured in such fashion.  So next year, that play will be outlawed, just as old style home plate collisions were outlawed after Buster Posey's career was almost ended after one.  And for the short term, it sure does create an interesting series, what with the Dodgers heading into enemy territory and all.

- Cal-Utah.  Cal appears to be making good progress under Sonny Dykes, but a win last night would have been a major step.  Alas, it was not to be, as Jared Goff picked the wrong night to throw 5 interceptions and throw a major wrench into his chances for the Heisman Trophy.  But Utah does appear to be one of the best teams in the nation, and the fact that we were in it right down to the last minute is reason to be hopeful for the remainder of the season.  And who knows, maybe this is the year we start beating Stanford again.

- Miami-Florida State.  Over the years, I've generally had little or no use for either of these teams, so it usually comes down to rooting for the one that I hate the least.  Right now, that's Miami, but only because they're not as good.

- TCU-Kansas State.  Bill Snyder really is a wizard.  74 years old, still coaching his heart out, in the stadium named for him and his family.  They couldn't quite pull it off last night, but you rarely see a game that Kansas State doesn't have a chance to win.  And that's not because blue chip recruits are dying for the opportunity to spend four years in Manhattan, Kansas.  It's all about Snyder.

- The President's Cup.  It will never achieve the status of the Ryder Cup, but it has carved out a bit of a niche for itself, and it's always fun watching the best players in the world square off in a match play format with something at stake.  We always seem to win this Cup, and maybe one of these days those victories will spill over to the next year so we can recapture the other one.

By the time it was all over, it was time for Saturday Night Live.  And Amy Schumer was pretty damn good.
Posted by Jeff Vaca at 4:38 PM 2 comments: