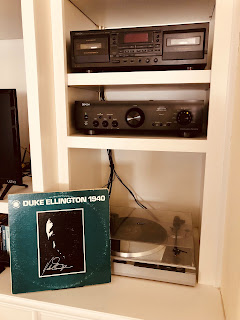 It's been a long time since I've gone down the Duke Ellington rabbit hole.  Last week, what sent me down was a tweet (a retweet, actually) from a music writer whose name I can't even recall off the top of my head, with his list of the 30 Greatest Big Band Jazz Albums of all time.  I figured there had to be a Duke album on the list, and the writer did not disappoint.  The album in the photo at left was not the album on the list, but we'll come back to that in a moment.

I knew who Duke Ellington was from an early age, but my first real exposure to his music came in the late 1970s.  My then-girlfriend's father was a jazz fan, and he owned the indispensable collection, The Smithsonian Collection of Classic Jazz.  My own tastes in music were starting to expand around that time, and he was kind enough to loan me the album, which I promptly recorded on cassette.  I still have one of the tapes, Memorex no less, but its useful, listenable life is long past.

I don't know that the Smithsonian Collection remains available today, but it has been re-created on Spotify by enterprising listeners, and the same is probably true for the other major streaming services.  It's a treasure trove, and particularly useful in helping to determine exactly what types of jazz music are palatable to a listener's ears.  For me, the two major discoveries were Ellington and Charlie Parker.  Going back through the Spotify playlist, it is striking how well the curators did with their selections of Ellington tunes for the collection:

East St. Louis Toodle-Oo (two versions, and yes, the Steely Dan version of the song was the first I'd heard)

Diminuendo and Crescendo in Blue

Brilliant songs all, and brilliant selections, considering there are better known tunes in the Ellington pantheon.

Back to the album pictured above - also a Smithsonian collection, a Christmas gift in 1980 from the same then-girlfriend.  However, by then I had gone to school in Berkeley and she had gone to UCLA, where she met her husband-to-be the first week she was there.  The gift exchange at Christmas might have been a bit awkward - I don't remember what I bought for her, but I'm quite confident it wasn't as nice as what she gave me.

The 1940 version of the Ellington Big Band is remembered today as the absolute pinnacle of his career.  It's come to be known as the "Blanton-Webster" version of the band, after the brilliant young bassist Jimmy Blanton (who would tragically succumb to tuberculosis at age 23) and the equally great tenor saxophonist Ben Webster.  Six of the ten songs listed above were recorded by the Blanton-Webster band, and there are at least a dozen others on the two-record set that are equally good.  It's that good.

Fortunately, the songs all exist today - the album to seek out on your streaming service is Never No Lament - The Blanton-Webster band, which collects all of the tunes the band recorded together.  Listening to it today, it's obvious why Ellington is considered one of the great musical artists in American history.  A rabbit hole well worth going down.  Besides, it's cooler down there.